If you are planning to move to Japan for a while or maybe even permanently and looking out for the most luxurious residential areas to stay at, then there is no better region to make your home at, than the Kansai region of Japan!

The region of Kansai has 7 main prefectures and lies in the southern-central region of Honshu, Japan’s main island.

The 7 main prefectures in Kansai include Kyoto, Osaka, Nara, Wakayama, Shiga, Mie and Hyogo and have some of the best and most luxurious residential areas in Kansai.

Check them out below!

Most Luxurious Residential Areas in Kansai

Well, if you can afford a place in Shinpoincho, then you should definitely think of staying in this area. Shinpoincho is part of Osaka prefecture. It is quite centrally located and is close to two train stations, the Shintennojimae-Yuhigaoka Station and the Momodani Station.

For those looking to make a home in Shinpoincho, it is an area where you can enjoy peace and quiet, as the residential streets are serene and it is away from the bustling city life. The value of land doesn’t fluctuate much unlike the other parts of Osaka.

It is also one of the best residential areas for those who have children, as there are plenty of good schools in the area. The area also has many restaurants where you can enjoy a delicious meal of Japanese cuisine.

The cost of living for a four-member family is around ¥4, 33,568 for a month and this is exclusive of the rent you will be paying if you do not own a home of your own.

Shinpoincho is one of those neighborhoods considered very safe, where you can live in luxury and in an absolutely peaceful atmosphere.

Ashiya is part of the Hyogo prefecture and is situated right in between the cities of Kobe and Nishinomiya. It is a city that features a lot of luxurious residential areas that have both mid-sized apartments and also mansions for those who wish to stay in one.

This city is often known to be one of the “Wealthiest areas in Japan”, as some of the residences are so luxurious that they even have their own private swimming pools, cafes and sports arenas.

Thus these residential areas are known to be quite large and well-contained with department stores for the asking.

Ashiya is well-connected by many railway stations in all corners, which is perfect for public transport from the JR West Ashiya station, to the Southern Uchide station and the Hanshin Electric Railway Ashiya Station and the Northern Hankyu Railway Ashiyagawa station.

Since the Osaka Bay is near Ashiya, there are a lot of luxurious properties, single houses and condominiums that keep going up for sale in the bay region.

The city even has its own university and many schools for the education of students. The monthly cost of living in Ashiya is around ¥1, 43, 886.

So if you are looking for a well-connected city, with good roads, sufficient department stores to shop at and a place that is surrounded by nature, then choose Ashiya to have all the luxury you require!

Often known as the “Diamond district” because of the cost of land, Umeda is known to have the highest price of land in the whole of the Osaka prefecture and this is exactly why you can find some of the most luxurious residential areas here.

Umeda is well-connected by public transport. It is in fact the main terminus of the northern railway which is very easily accessible.

See also  7 Outlet Malls In Japan You Have To VISIT!

It is also well-connected in terms of its roadways as it is located near one expressway and is connected to 8 national routes.

Umeda has a lot of educational institutions for those who have children who are studying.

If you are someone who can deal with weather extremes like warm summers and cold winters, then choosing the town of Yokkaichi is the place for you as it has luxurious residential areas which are surrounded by a lot of natural beauty.

Yokkaichi is part of the Mie prefecture in its north-central part.

It is known to have one of the best residential areas to live in. Apart from apartments, if you are looking to buy a house, it is the perfect area as each house is fenced and thus you can have your own private space. The estimated monthly cost of living in Yokkaichi is around ¥1,50,783.

For those who have children studying, Yokkaichi has over 30 educational institutions including elementary schools, middle schools, colleges and universities for students. It also has international schools for those who wish to put their children there.

Yokkaichi is located next to the sea port and is well-connected to 3 expressways and 7 national routes for smooth travel.

Living in Nishinomiya is like living in a place where you get the best of everything from rivers to the east and mountains to the north, this city is perfectly located and is known to host some of the most luxurious residential areas. Located between the cities of Ashiya and Amagasaki, Nishinomiya belongs to the Hyogo prefecture.

Since Nishinomiya is located in between some of the major cities of Kobe and Osaka, luxurious residential areas are very common here. Public transport is definitely not a worry in Nishinomiya as it has its very own railway station.

From universities to colleges to schools, this city has it all, making it the perfect place for anyone to live! It also has a lot of places of interest you could visit in your spare time. The monthly cost of living here is around ¥1, 67, 081.

Kobe is located at the southern side of Honshu and belongs to the Hyogo prefecture. It is often known as an “International city” because the city has adopted a lot of western customs in terms of culture and lifestyle, trade, clothing and housing.

For those who have a family, Kobe is a great city to live in as it is considered a city that is very safe and has a lot of things to do and places of interest that you can visit as well.

You can literally enjoy the best of both the foreign culture and the culture of Japan in itself if you live in this city. It is known to have luxurious residences for people to live in, whether you choose to live in a house or an apartment, Kobe has it! The monthly cost of living in Kobe would be around ¥ 1, 86, 153.

For those who have children, Kobe has a lot of schools, colleges and even its own university for students.

Kobe is well connected to the JR West Shin-Kobe station and Sannomiya Station and also has numerous expressways and is easily accessible to even the airport, for easy travel.

Well, for those of you looking to make your home in Japan for a while, choosing the Kansai region is a great option as it has plenty of luxurious residential areas for you to choose from. I hope this article has helped you get all the information you needed to make your decision a smooth one! 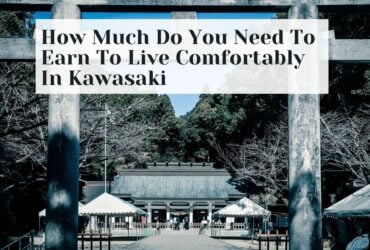