We curated a list of aquariums in Japan that will blow your mind! Check it out!

Are you the kind of person who enjoys learning about aquatic species?  Well, if you do, I’ve got some questions for you! Have you ever visited a real fish aquarium in your area?

Have you ever dreamt of seeing a gigantic fish aquarium in Japan filled with rare fish species you can only find there? If so, then this article is for you!

One of the nations renowned for its significant aquaria and numerous aquatic attractions in Japan. Japanese aquariums have a lot to offer, particularly those that value marine life.

Do you know that there are aquariums in Japan that are ranked as some of the largest aquariums in the world? If you don’t, then come and join me as I discovered great aquariums during my stay in Japan.

Here is a list of 6 aquariums you absolutely must see in Japanese aquariums. All facts and information provided are based on my personal experiences and lessons learned during my time in Japan.

As I stated, one of the largest and most well-known aquariums in the world can be found in Kaiyohaku Park, which is named Okinawa Churaumi Aquarium.

This tourist attraction aquarium spot was my first ever visit to an aquarium in Japan.

Luckily, I was able to see animals that I hadn’t seen before, like tarsiers or Japanese soft-tarsiers, Mantophis Jinta, and it is also home to some very peculiar fish species, like Vampyroteuthis infernalis, which is a type of deep water squid.

I highly suggest that if you are going to visit the stunning aquariums, you must set a schedule first before going to the place.

See also  10 Scary Haunted Spots In Japan That Will Creep You Out!

Under 6 years old are free from admission.

Last year, I visited a sea life park in Tokyo and was blown away by the display of unique species.

Approximately 650 species of organisms are bred in 47 tanks, including tuna that migrate around a large donut-shaped tank. Among the many strange and intriguing creatures, I saw a few that seemed to be closer to humans than any other fish in my life.

while children ages 12 and below can enter for free.

This public aquarium is located in Minato Ward and is known as Japan’s biggest dolphin show tank.

The Port of Nagoya Public Aquarium, run by the Nagoya Minato Promotion Foundation, was first opened in 1992. The largest dolphin show tank in the world has been introduced thanks to the aquarium’s expanding facilities.

The research facility is known to have had success in breeding species such as the emperor penguin and chinstrap penguin. Having been classified as a World Natural Monument by UNESCO in 2003, the aquarium was voted the best aquarium in Japan in 2006.

In the Japanese city of Mie is the aquarium. The preservation and propagation of rare marine species that are in danger of going extinct are other priorities at Toba Aquarium. A finless porpoise was born, and a second-generation sea otter was born for the first time in Japan. These are notable breeding events.

The zones provided on the spot meet my expectations because you can easily keep track of them and choose which ones to visit based on your preferences and those that will go well with the exhibition.

whereas children under 3 are admitted free.

“There were unfamiliar manatees and dugongs. As expected, I was able to spend time without getting tired of being proud of the number one variety in Japan. Also, since the direction of travel is not particularly decided, I was able to go round and round at my own pace. The porpoise had just had a baby, so I couldn’t see it up close. I think it’s because I don’t give stress, so I can’t help it (;_;) The closing time is short at 17:00, so be careful when visiting.

By the way, the sea otter place was crowded all the time as I imagined.”

When it first opened in 1990, the public gave the aquarium the name “Osaka Aquarium Kaiyukan.”

Osaka Aquarium Kaiyukan has opened its doors to the public for the first time with a total volume of 10,941 tons of water.

Each tank represents a different region of the Pacific Rim, and the exhibits incorporate the concepts of the Ring of Fire and the Ring of Life.

On my journey through this aquarium, all I can say is that it is educational and amazing. The facility is clean and well-maintained to Japanese standards. The colorful fish that swim within the aquarium’s water tanks, the majestic coral colonies, and various sea creatures with unique shapes are mesmerizing.

“It was crowded however there are many things to see and almost everything has an English explanation. The exhibition is separated by geographical areas and watching the sharks was great!” 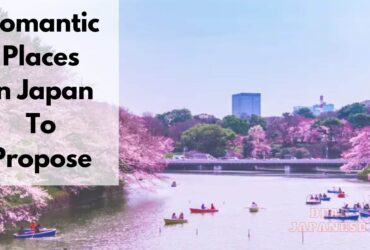 13 Most Romantic Places to Propose In Japan

You need a lover to make your heart beat faster than ever!! ...